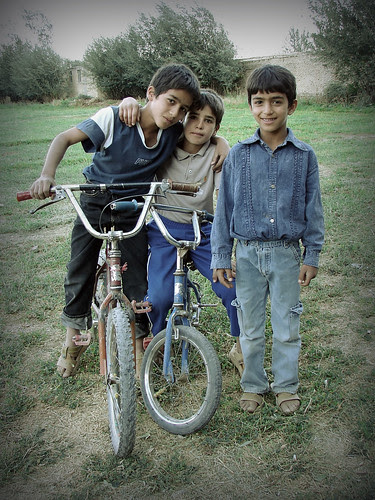 Image courtesy : Hamed Saber on Flickr, check usage terms before using the image.
The event dates back to February of 2002. I was a class VII student then. Earlier that week I had received a letter from Hindi academy. I had won third price in an essay writing held in the summers last year. I, with my parents, boarded a bus to Mandi House. The felicitation ceremony was to be held there in Hans-Dhwani auditorium. Elated I reached the place in time, only to find a friend of mine had also won consolation prize. It double-folded my happiness, my long time rival was floored by me on a "level-playing" filed, as there was no so called impression on invigilator's mind. I had surpassed by friendly "rival". The joy of earning a position in a national level competition combined with surpassing a long-time friendly "rival" was something really difficult to hide. On my way back I was lost in thoughts, we were not coming back to our house but instead were going to relatives' place and that was the thing I disliked. Next day morning I reached the school late and to pleasure my friendly "rival", Ravinder was also late. As we thought about the punishment coming our way and the day ahead, we saw our Hindi teacher coming to us. As she approached she hurled some straight words to both of us, "Shame on you guys. You couldn't even spare even this day! There your name is being announced in the morning assembly for all the good reasons and all this only to find that you fools are late". A short grin passed our face as we realized the situation of our teacher, she couldn't leave us back at door and it was our gate-pass to school despite being late! We looked at each others' face and then followed our teacher with drooping shoulders and a pale face, as if to hide our elation. In school corridors we walked hand-in-hand and at stage we posed like heroes of the day, establishing the trend of not being punctual as a great style statement. And hence we proved, "A friend in need is a friend indeed".
at 00:23 No comments:

Email ThisBlogThis!Share to TwitterShare to FacebookShare to Pinterest
Tagged Under - friendship, fun

Image courtesy :SapnaChiara on Flickr, check usage terms before using the image.
Shah Rukh Khan, i.e. the SRK or the King Khan is the name of the mega personality that virtually rules the Bollywood . The guy rocks bollywood. He simply mesmerises by his acting skills. The diversity of roles he has played through his acting carrrer in last two decades simply leave us speechless. Innocent youngster in Chamatkaar (1992), an aspiring engineer in Raju Ban Gaya Gentleman (1992) showcasing problems and troubles , revengeful son in Baazigar (1993), simple young in Kabhi Haan Kabhi Naa (1993), passionate lover in Darr (1993), sheer romantic in Dil Wale Dulhania Le Jayenge (1995), great romantic portrails in Dill To Pagal Hai (1997) and Kuch Kuch Hota Hai (1998) an eternal lover in Devdaas (2002), superb performance in remake of Don (2006). Started career from TV shows like Fauji (1988) and is now ruling the Bollywood, The Delhi guy defines rules in his own ways, has an exclusive sense of humour and mind-blowing stage presence. He has managed to rule hearts while doing commercial cinema. Lately he started choosing roles according to his age and now his performances have striked chord with public. Last year Chak De India (2007) and Om Shanti Om (2007) were excellent performances. His performances of early years are breath-taking and leave you in pools of positive thoughts.
at 02:55 1 comment: