Journeys In Memory - I 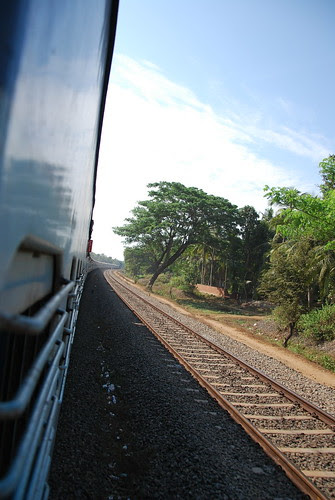 Its evening around 5, Sameer is supposed to call me to pick him up from Hari Nagar Clock Tower bus stand as we have to catch 6’0 clock train to Jaipur from Delhi Cantt railway station. Since he has not called yet I call him up and he hangs up saying that he will call back on reaching the location. Around 5:30 and he calls me, I rush to pick him up and we reach my home to take my luggage. We get a rickshaw to the station and reach there well in time. At station Shaily is waiting, with her parents, for us to join her. We share hellos and talks as our parents are busy talking and engrossing us in their discussions and advices for forthcoming winter season in Jaipur. As the train comes we hurrily board it, grab our reserved seats and arrange our luggage. We have to pick up Tanvi from Gurgaon station. The journey till Gurgaon passes sharing random talks and looking out for lights in the darkness spread around the tracks in western out-reaches of city of Delhi.

At Gurgaon station I, rather we, lookout for lovely, chirpy Tan. Didn’t want her to be left behind as I suppose it will be a boring journey without her. Even get ready to call her as am not able to make her out in the crowd outside. Suddenly she emerges from the crowd with her father helping her with the luggage. Train moves even before Tan is able to arrange her luggage or any of us helped her with the stint? As soon as things settle we are busy talking endlessly, topics being airports, stations, refineries or whatever was visible outside the window and random discussions on some very vague topics and events of vacations. Many co-passengers come and go and we even have to share our reserved seats many times. As we enjoy the journey train has hustle-bustle mainly because of people asking for stations to come and their talks among themselves. We miss some games we could play in case we had cards with us and have to be with the fact that phones will no longer play FM and may not be in network coverage.

Meanwhile I had to get to the end of the compartment just one cabin beside ours’ to ask two guys there to put off their cigarettes as I and Tan were disturbed because of the smoke but she was reluctant to tell the problem. But looking at the expressions on her face and somewhat forced efforts to control breath to avoid that allergic air I could make out that she was not comfortable and even it was getting on my nerves too. So I was able to make my mind and talk to these people and they suggested me to open the train door and thankfully this did the trick as the fast blowing wind jets could easily clear the air and we could breathe easy now.

The later part of journey was quite silent as we were falling short of words to share a lot with us and were even tired of talking endlessly. At Jaipur station we look out for way out as we struggle with our luggage. Outside the station we are pleased to find an auto at nominal charges as 12:30 is quite late in the night with all the luggage around. I talk almost zero as the auto moves towards the institute and am pretty busy matching the roads with my memories of past about 2 months, generally because of rides around several Jaipur stretches with this guy called Akash Burania.

Back in hostel I put my bag and since am not feeling sleepy, make a move to Sameer’s room in hostel 6. We pass time talking to each other, Sameer’s room-mates and Mridul and I also reply to Tan’s SMS before she takes leave to sleep. As all are exhausted and want to sleep I too go to my room and try to sleep but thoughts from journey and time spent Guddu and Shivani at Bangla Sahib Gurudwara earlier that evening and even the image of moon in black star studded sky that my eyes just caught in the mess courtyard while going to fill my water bottle continue to revolve in my mind ...