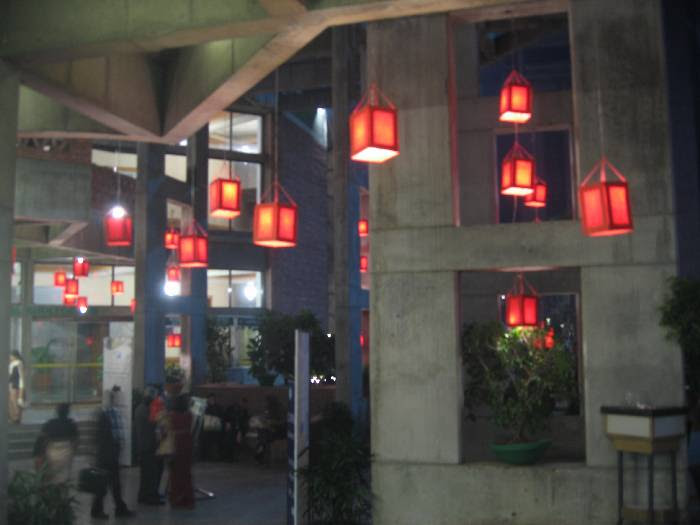 Recently I visited Council of Architecture, India Habitat Centre, Lodhi Road, New Delhi. The 45 minute bus ride brought back to me the memories of the days when my father used to take me out to places like Railway Museum, air Force Museum, Exhibition Grounds.... I could easily realise what I was missing for so much long a period of life. Beautifully paved vistas of Central Delhi in a sunny backdrop left me mesmerised. The cosmopolitan attitude of the area reminded of an era when country used to be more conservative. It could only be a possible site in Chankya Puri or Lodhi road to see a girl in her early 20s making splashes in her Bentley, a rare scene on Indian roads in any case. Newly erected bus stands and Delhi Metro's sign boards were giving a foresight into city's future, which is fast gearing up for its date with Common Wealth Games in 2010. At the same time couples cuddling each other in demure surroundings of Lodhi Gardens were justification enough for the Taj being in India. The environment at restaurants like Eatopia was enough to brave challenge from global biggies like Mc'D, simply on the firm basis of the fact that the crowd gathering at the place was far more hip, classy and lively. It can be amazing for anyone that still many of the front runners in managing the nation operate from beautifully crafted buildings of the region. The bureaucratic setup is intricated in the area's very being.

On many occasions only the fact that we want to be part of such a rich and posh way of living, we wish to inherit this great legacy is enough to boost peoples' desire to live and gives a feeling of being able to conquer the world....

Email ThisBlogThis!Share to TwitterShare to FacebookShare to Pinterest
Tagged Under - Delhi, excursions, friendship, just like that, positivity, story, travel 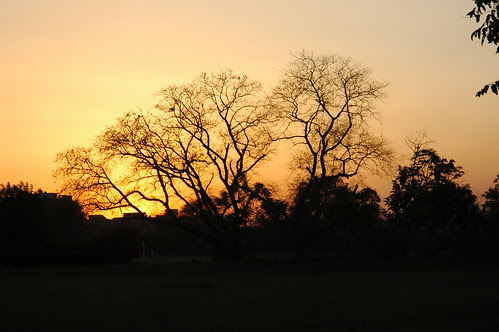 Image Courtesy : World is beautiful on Flickr, check usage terms before using the image.
On June 08 '07, I got to venture out on Delhi's roads on scorching summer day. The blistering heat could make even the most enduring ones to run for cover.
I live in a bustling colony in western Delhi and had to go to Vastukala Academy, aside temples of educations IIT-Delhi and JNU, to collect result of architecture aptitude test.
So I got up a little early in the morning, expecting to finish my work and come back to home by 2'o clock in the afternoon. Having done with things like breakfast, etc. I ran out of home to catch bus that would leave me at Dhaula Kuan (DK) interchange. It was already 11:30, but I was enjoying the ride; as to passengers surprise the driver of the DTC bus was driving nicely and I could even spot a few good looking girls. Moreover summers are my favourite season, everything being hot, bright and windy. Sooner the bus reached DK and I got off it.
Now I was waiting for next bus to arrive, but to my dismay it was not a very pleasant experience because the Sun was shining harshly enough to melt the asphalt of roads. It was very panicking to stop and wait for a ride while the mercury soared to 44 degree Celsius and loo, hot seasonal winds, blew uncalmly.
To manys' respite the bus was there after about 10 long minutes. I hurriedly boarded it and was happy to find some shade. I found a seat and sat calmly sure that it will take at least 30 minutes before I reach my destination. Through the way I glanced the magnificent reformations the city was witnessing in a bid to prepare well for the Commonwealth Games 2010. The bus zoomed through bustling commercial areas and calm residential colonies of South Delhi. I was disappointed to see encroachments and dirty shanties just beside R.K.Puram, one of the most refined localities in the city. The bus took a turn to Vedant Desika Marg and my mind started reminding me of leaving the bus and as per my habit I de-boarded a stand before (more because of my fear of being lone one to leave and thereby ignored and taken to the next stop!).
So I was here in front of Physical Sciences Faculty of JNU. After waking down the lane about 200 metres I reached my destination and straight away asked the administrator to give my score card. He printed it immediately but as per "Indian tradition" didn't give it to me before another 1.5 hour, the reason being it was not signed by the head of the institution.
Soon I found that i was not the lone one waiting for the signs, but there was a bunch of about 8-10 students! Many others were waiting for there turn for exam. So I could pass time listening to them, having chats with few ones, planning about return, cursing the system and very pleasantly checking out the beautiful girls, etc.... But as the time progressed it was becoming difficult to bear the delay. And it all ended only when few guys started something like a little agitation (not the Rang De Basanti style, but just a simple negotiation). And now we had our score cards with us, at 89/200 my score was average considering the topper could manage only 117.
On my way back I had to walk about 500 metres before I could find a bus stand. Very annoyingly I had to hop onto the bus while it was still running. The rest of travel till DK was fine.
It was about 2:55 and the hot weather had started taking toll on me. With no snacks or drinks for last 3.5 hours I was feeling uneasy and in a hurry to reach home as early as possible. But the whole thing went wrong when I mistook route number 568 to 588 and boarded the wrong bus!
The bus this time was a real hell, the staff of bus was 4 people strong with each one smoking proudly (I hated them for this) and stopping the bus for uneasily long intervals of time. but it ended soon and I was on my way to home, on another bus followed by a 15 minute walk in scorching sunshine!
After reaching home I was happy and comforted as I could sit on my PC and enjoy playing the race game abbreviated as NFS-Most Wanted!
at 03:20 2 comments: